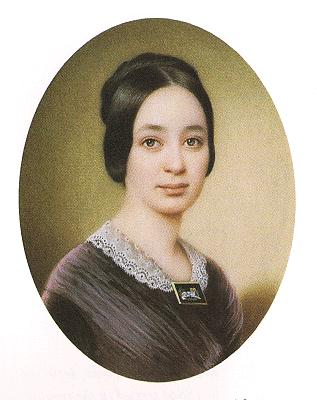 Varina, the daughter of William and Margaret Howell, met Jefferson Davis when she was only seventeen years old. The first encounter did, however, make a memorable impression on her. She wrote her mother soon after their meeting:

"I do not know whether this Mr. Jefferson Davis is young or old. He looks both at times; but I believe he is old, for from what I hear he is only two years younger than you are [the rumor was correct]. He impresses me as a remarkable kind of man, but of uncertain temper, and has a way of taking for granted that everybody agrees with him when he expresses an opinion, which offends me; yet he is most agreeable and has a peculiarly sweet voice and a winning manner of asserting himself. The fact is, he is the kind of person I should expect to rescue one from a mad dog at any risk, but to insist upon a stoical indifference to the fright afterward." [from The Papers of Jefferson Davis, Volume 2, pages 52-53]

Just over a year later, Davis and Varina Howell were married at The Briars, her parents' home in Natchez, Mississippi.

Varina Davis was well-educated and possessed as strong a will as her husband. They had their differences at times over the fifty-four years of their marriage, but they remained devoted to each other through several decades of remarkable hardship. After Jefferson Davis' death in 1889, Varina Davis published Jefferson Davis, A Memoir in 1890, then moved to New York City the following year to pursue a literary career.