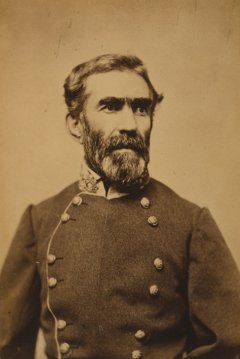 Photo circa 1861-65 Courtesy Library of Congress

An 1837 West Point graduate, Mexican War veteran, and Confederate general, he spent the first year of the Civil War commanding in the Pensacola/Mobile area. Bragg replaced Beauregard at the head of what became the Army of Tennessee in mid-1862, a post he held until late 1863, when he asked to be relieved after losing Chattanooga. He acted as a military advisor for Davis in 1864 and held temporary commands in the Carolinas during the final months of the war.