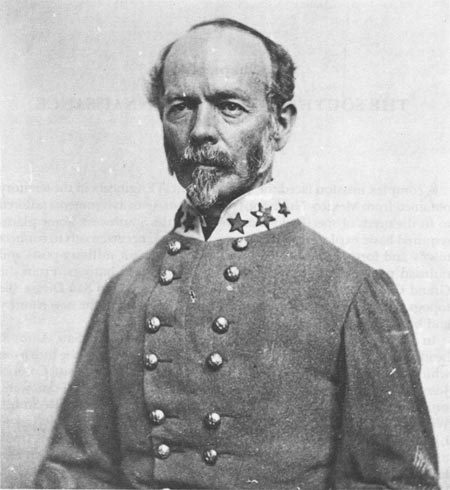 One of the most controversial generals of the Civil War, Joseph E. Johnston was born and raised in Virginia, the son of a soldier who had served under Lee's father in the Revolution. He entered West Point with Lee in 1825 in the class behind Davis', graduating 13th out of 46 in 1829. Except for a brief time as a civilian engineer (1837-38) he remained in the Army until 1861. His most notable service was on the staff of Winfield Scott during the Mexican War, along with Lee, P. G. T. Beauregard, and George B. McClellan. Johnston and McClellan became close friends.

Johnston teamed with Beauregard to win the first significant Confederate victory of the war at First Manassas, but he soon became involved in a dispute with Davis over his rank. Relations between the two remained cool for the rest of the war.

During the Battle of Seven Pines at the end of May 1862, Johnston was severely wounded, and command of the Army of Northern Virginia passed to Lee. Johnston returned to service that December and was placed in overall command of Confederate forces in Tennessee and Mississippi, an assignment that he never completely comprehended. When Grant trapped Pemberton's army in Vicksburg in May 1863, Johnston rushed to Jackson and attempted to organize a relief effort, but his cautious nature led him to delay action longer than Davis would have liked, and Pemberton surrendered before Johnston could mount an offensive.

Despite their growing feud, Davis turned to Johnston again in December 1863 to head the Army of Tennessee after Bragg had lost Chattanooga. He was flanked out of Dalton, Georgia, by Sherman in May 1864 and continued to pull back until reaching the outskirts of Atlanta. By all accounts Johnston conducted a textbook retreat, but many, including Davis, were concerned that he would give up Atlanta without a fight. Under considerable pressure from his cabinet and from certain congressmen, Davis relieved Johnston in mid-July.

In February 1865 Davis gave Johnston yet another chance, placing him in command of the forces in the Carolinas opposing Sherman. He surrendered his army on April 26. Johnston became involved in the railroad business after the war, wrote a memoir in which he was highly critical of Davis, and served one term in the House (1879-81).

The Johnston-Davis relationship is thoroughly documented in Volumes 7, 8, and 9 of the Davis Papers, as well as in  Volume 10, which covers Johnston's return to command in December 1863 and Davis' removal of him in July 1864. Notable biographies include Craig L. Symonds, Joseph E. Johnston: A Civil War Biography (1992) and Gilbert E. Govan and James W. Livingood, A Different Valor: The Story of General Joseph E. Johnston, C.S.A. (1956). Other essential works are Thomas L. Connelly, Autumn of Glory: The Army of Tennessee, 1862-1865 (1971) and Steven H. Newton, "Joseph E. Johnston and the Defense of Richmond" (Ph.D. dissertation, College of William and Mary, 1989).